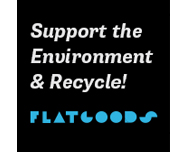 Sustainability in business practices has become increasingly important to consumers in recent years. As the public becomes more informed regarding the environmental impact of manufacturing, many are making a greater effort to support companies that employ environmentally conscious practices. At Flatgoods, utilizing a sustainable business model is at the core of what we believe. Below you’ll find facts that demonstrate the amount of waste produced through normal activity, the positive effects that can result from sustainable living, and how businesses are making conscious decisions to improve both their environmental footprints and their bottom lines.